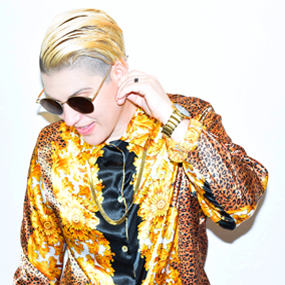 God-Des is an accomplished producer, writer, emcee and musician. The definition of an assertive female, God-Des has been inspiring listeners with her bold swagger since she first made her mark nationally and internationally in the hip hop/soul duo God-Des and She. The two received major notoriety when they appeared on the season 3 finale of Showtime’s hit series ​The L Word. ​God-Des and She continued to draw wide attention by releasing four successful albums, performing all over the United States and Europe, and inspiring millions of fans. Additionally, their music video “Love You Better” was voted number 1 for fifteen consecutive weeks on ​MTV Logo​ and their music could be heard on different ​MTV​ and ​VH1​ shows, ​Beverly Hills 90210​, and their song “Love Machine” was licensed by ​Ford​.

In early 2018, God-Des started working on her first solo project. Her song “Wasting Time” features Greg Kramer (trombonist for Macklemore) and her debut single “The Weekend” was was featured on one of Spotify’s editorial playlists. Her solo project is a perfect blend of hip-hop, pop and female empowerment. Her musical moods range from defiant to nostalgic, feel good to boisterous and every emotion in between. Not only does she capture the essence of an unapologetic female, but she writes and records all of her own beats and vocals. A percussionist at heart, God-Des’ ear for rhythm can be heard radiating off every track she makes.