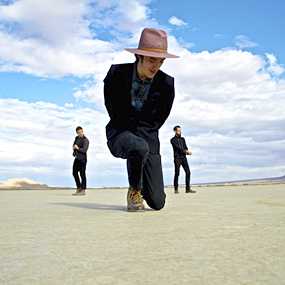 Keyboardist/songwriter Eric Stang and drummer Mario Cerutti first met back in 2006 in the practice rooms of DePaul University’s Music School in Chicago where they studied jazz and classical percussion. Since the launch of Polarcode in 2010, the now Los Angeles based duo have played their unique brand of indie/alt pop across the country. Every song is its own experience, featuring different vocalists over vibrant, intricate production.

Their 2013 EP Supernatural received accolades for its poignant and powerful songs. The EP’s songs were featured in several placements including E! News, TNT NCAA March Madness and Victoria Secret Pink. The 2015 ballad “Nowhere Fast (feat. Lauren Ruth Ward) was used in the Disney Channel Original “The Swap”. With over 160,000 views on YouTube, the minimalist, stunning black and white music video for “I Crave You (feat. Lauren Ruth Ward)” has been grabbing people’s attention around the world. Polarcode’s recent releases include “Cut You Loose” and “Devices” featuring Taylor John Williams, a finalist from Season 7 of NBC’s “The Voice”. IMPOSE magazine stated, “Polarcode and Williams have proven themselves as something of a collaborating power duo.” Cut You Loose has received rave reviews in several publications. High Voltage Magazine said, “Polarcode are such talented musicians that it all sounds good no matter what.” Lumino Magazine raved, “A far cry from your typical rock set, these daring and innovative musicians want you walking away having experienced a musical spectacle of epic proportions.”