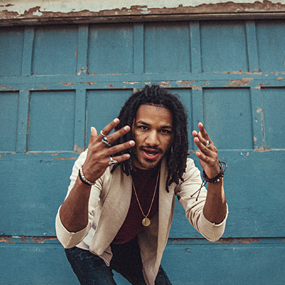 Rich Robbins, is a hip-hop recording artist out of Chicago, IL. Raised in Philadelphia, Rich began his career as an emcee upon returning to Chicago at the start of high school. In 2012 Rich was accepted into First Wave: a full-tuition hip-hop scholarship to the University of Wisconsin –Madison.

As an emcee, his art is the narrative of a young Brown man who has homes in both urban and suburban communities, thus Rich’s art is a means of bridging those two worlds together. The Isthmus described Rich’s style to be “soulful, sharp and overflowing with emotion...exceptionally versatile on the mic, pivoting from complex storyteller to tongue-lashing lyricist with ease.” Rich has worked with and opened for well-known artists such as Mick Jenkins, Noname, Kweku Collins, Saba, and many more. In 2016, his album “All.This.Gold” was praised by blogs and earned him nominations for both Album of the Year and Male Rap Artist of the year in the Madison Hip-Hop Awards. In 2017 Rich was nominated by the Madison Hip-Hop Awards for Male Rap Artist of the Year.