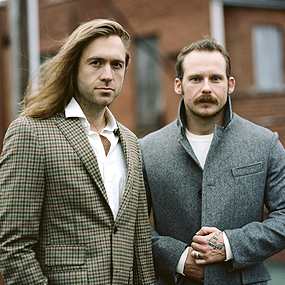 Austin-made singer-songwriter duo Penny & Sparrow dwells in the spaces left between
contradictions and opposing forces. In fact, it’s where they’re most at home. As the title
of their album, Let A Lover Drown You, suggests, they know intimately the ideas
of using pain as a barometer of passion and giving as a means of gaining.

Their gorgeous, almost luminescent harmonies paired with cutting, contemplative songs, inspired by a musical grab bag of Simon and Garfunkel, Slim Whitman, The Swell Season, Bon Iver, even Broadway composer Stephen Sondheim, earned the duo a nationwide legion of fans; many bordering on, if not, obsessed.

The thoughtful attention paid to each individual line and even the smallest instrumental placement makes the songs on Let a Lover Drown You so much more multi-dimensional and virile than the ubiquitous singer-songwriter folk. With the help of producers John Paul White (The Civil Wars) and Ben Tanner (Alabama Shakes), they slashed unnecessary phrasing and stripped their songs down to their core.

Whether through their jovial on-stage banter or the palpable humanity of their songs, that
ability to make listeners feel as if they’re speaking to them, to relate to life’s
contradictions and struggles with compassion and humor, is the true force behind Penny & Sparrow and why their music resonates so deeply.