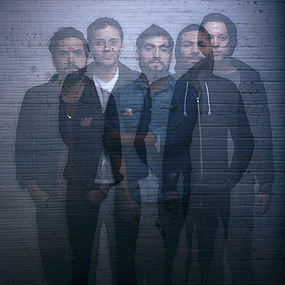 Mix intriguing melodies with captivating textures, pair with an energetic live performance and the result is pop-rock quintet Hydra Melody from San Antonio, Texas. Often compared to the Young the Giant, Coldplay, and Kings of Leon, the band sets itself apart by blending Latin-influenced rhythms with pop-sensibility and catchy vocals.

The band recorded its first full-length studio album, ‘Nocturna,’ at Ocean Way Studios in Nashville, Tennessee with producer Will Pugh of Cartel at the helm. Balancing buzzy synths with clear guitars, the album sounds full but atmospheric, providing a dramatic backdrop for Jordan Berlanga’s compelling lyrics.

“One listen to ‘Nocturna’ shows that this is indeed an album by a band that has found its sound,” writes James Courtney of the San Antonio Current. “The sound is cinematic yet brooding, angsty yet patient, and, from start to finish, it's a perfectly executed and elegantly polished alt-rock gem.”

Initially formed in 2008, the band released three EPs—Day of the Dukes (2008), Maybe One Day (2010) and Hydra Melody (2012)—and packed several nationwide tours under its belt. In addition to providing direct support for Third Eye Blind’s 20th anniversary tour (fall 2013), Cartel (spring 2015) and Everclear (fall 2015), the band has also opened for acts including Mutemath, Minus The Bear, Circa Survive, Ben Kweller, The Toadies, As Tall As Lions, Dance Gavin Dance and Good Old War.

Whether performing at SXSW, Summerfest in Milwaukee, CMJ Music Marathon, or the Viper Room on Sunset Strip, the band and its big sound has drawn a passionate following across the U.S. while staying connected to hometown fans in the Lone Star State.