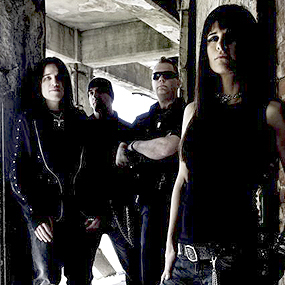 Loud rock has always been at the core of the group. Lead singer, Helena Cos, and guitarist, Johnny Nap, started as a duo playing every dive bar in New Jersey and New York City.
Now, the group tours on a national scale, including supporting the likes of Pop Evil, Framing Hanley, ran a leg on Van’s Warped Tour and scored a slot at Berlin’s Popkomm Festival.

Now, savvy at the art of song-crafting, Spider Rockets re-entered the studio to record the upcoming, “Bitten,” produced once again by Eric Rachel in New Jersey and with co-production credits going to Ryan Sambrook and mixing by Zach Ziskin in South Florida. From both a compositional and performance standpoint, “Bitten” is the group’s strongest work to date. Long before completion of the record, an early rendition of one stand-out track,“Scream,” garnered over 35,000 hits on YouTube without any promotional efforts and no official release.