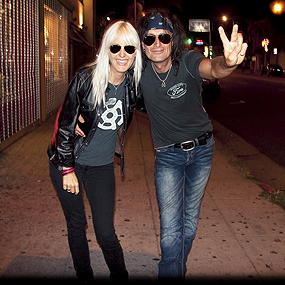 Bam (Dogs D'Amour, The Wildhearts) and Share Ross (Vixen) started Bubble as a two piece band in 1999. It began as a way to let off steam as they were both in 'recovery' from their old bands, Vixen and The Dogs D'Amour. With just guitar, drums and Share rasping out rock vocals... they quickly created a B-U-Z-Z in Hollywood.

3 albums and 15 years later, Bubble continues to write and perform songs that have garnered such honors as the prestigious John Lennon Songwriting Contest for Song of the year and Best Female Guitarist in Los Angeles two years running. Their songs have been featured in many movies and TV shows and have earned them a loyal following.

The core of Bubble has always been Bam and Share and their unbridled passion of all things dirty and rock n roll along with an unabashed love of the Beatles. Today, Bubble exists in digital download format only as the cd's have long sold out.