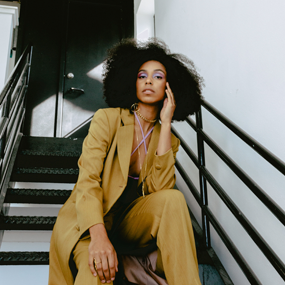 Torre Blake is an R&B-rooted singer/songwriter who gravitates toward strikingly different sounds. As a child growing up in Austin, she fostered a passion for music, favoring singing before transitioning to writing her own songs in high school, naturally swaying toward soulful sounds she grew up listening to like Musiq Soul Child, Lauryn Hill, India Arie, and Angie Stone.

Now 26, she leans toward artists with unique and bold sounds, like Rayven Lenae, Amber Mark, Charlotte Day Wilson, and Solange. The influence of deep soul and sultry sound can certainly be heard in the stripped-down version of the track, “Ain’t Thinkin’”. Released in early 2020, the song and accompanying visual showcases the raw and untapped power of Torre’s greatest instrument: her voice; all the while bringing listeners along on the journey of discovery and an experience they won’t soon forget.

Though early in her career, Torre has already gained fans in the Austin area, showcasing her talent at staples like SXSW and Antone’s (Austin), Hotel Café (LA), and Rockwood (NY), and appearing at multiple So Far Sounds across the nation.

Torre’s music is packed with raw emotion, an eclectic mix of sounds, and inspirations from the world around her. It’s no wonder that audiences leave mesmerized, feeling as though they’ve just unlocked one of the best kept secrets, because they have: Torre Blake is here and she’s ready to take the world by storm.