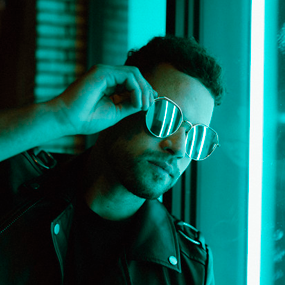 IO_Shadows
Update Required To play the media you will need to either update your browser to a recent version or update your Flash plugin.

Lucien Moon is the alias for British singer/songwriter, Jamie Benkert, an artist who has developed into a diverse Pop, RnB and Soul musician. Lucien Moon is a brand new project for Benkert, who has always previously gone by his legal name, Jamie Benkert. After appearing on the TV show The X Factor in 2015, the core passion within Benkert was ignited, but his journey truly began when he started singing at 9 years old, inspired by artists such as Craig David, Usher and Justin Timberlake.

After his name change, Benkert recently spent 12 months taking his fans on a journey to get to know Lucien Moon on his journey to create from the soul. To date, he has taken his fans to LA, Iceland, Poland and his home town of Northampton, UK, filming various music videos, and giving the behind scenes via his Instagram. His fans have really started to connect with the new direction his music has gone.  Along the road, Benkert has worked with various new artists and co-written a song for UK Urban legend DJ Ironik and one of the UK's dominating Producers, Spookzville. Benkert wrote the very catchy chorus for Ironik's early 2020 release "Green Light."  They also went on to release a collaboration song mid 2020 titled "Know Your Name."