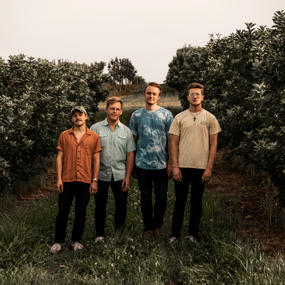 Imagine waking up on a Saturday in August. The grass is sparkling with dew and your coffee mug is warm in your hands as you settle onto your couch. You’re waking up slowly as you text your friends and make plans for the day. Flash forward to 2 o’ clock as your crew piles out of your 1998 Honda Odyssey and onto the beach. The sun is high in the sky and the sand is hot on your feet but there’s a cool breeze blowing off of the water. At the end of the day, you and your friends retire to your front porch. Your stomach hurts from laughing as you all reminisce about stories from college. Your cheeks are still flushed from the sun and your feet are still dusty from the sand. Your friends’ colorful, mismatched bag chairs appear as a cheerful reverie in the darkening night, and the porch light is on. Quickly - bottle this moment and turn it into music. This would be the music of Often Home.

Often Home is an indie rock band composed of four college friends from Grand Rapids, MI. Aaron, Ethan, Carson, and Cody bring the upbeat melodies of pop music and combine them with the grit of rock and rock in attempts to create music that encourages friends from all walks of life to gather, take a load off, and catch up. They released their first self-titled, self produced EP in September of 2018 and with fun-loving songs like “Quickly” and “Rise”, they immediately caught the ears of their West Michigan listeners. They then released their single, “My Heart”, in March of 2019 which has captured over 30,000 streams on Spotify and included playlist placements on Spotify’s “Fresh Finds” and “Fresh Finds: Six Strings” playlists as well as alexrainbirdMusic’s “March 2019 Indie/Rock/Alternative Compilation.” Their latest release, “Keep It In”, was released in March of 2020.

They have shared the stage with bands like The Beths, Bad Bad Hats, Brother Elsey, Wildermiss, and others. The boys of Often Home put on an energy packed live show that combines the comfort of home with the joy of a night out. Welcome in, the porch light is always on.