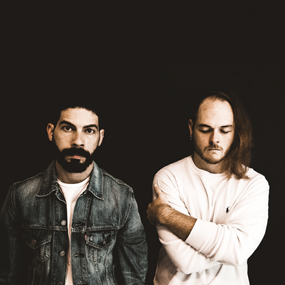 When Andy Brooks (former Vocalist for Transmit Now) asked Shohn (former Guitarist and Vocalist for Repel the Robot) to produce a few demos for him in the Winter of 2016, neither of them had any idea it would create what is now YO//NG OPT/MIST. Songs that started as simple ideas thrown together hastily in Garage Band by Brooks became an eclectic mix of Rock, Alternative, and Pop interwoven between Shohn's sense of harmony and Electronic production. No overthinking, plotting or pandering; the sessions that became YO//NG OPT/MIST were made solely by doing what felt right in the moment. As of 2020, YO have made a name for themselves in the Dallas/Fort Worth area with only three shows in the scene. They were nominated by Central Track as one of the Best DFW Pop-Rock Artists, and were quoted as "Already doing it all" by the Dallas Observer. Currently, they are writing and gearing up for new releases, music videos, and more live shows to promote. Follow them on social media to stay up on all things YO.