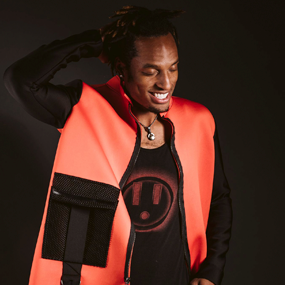 AY Musik is no ordinary entertainer - he is raising the expectation of music and entertainment.

Born and raised in Kansas City, AY grew up in one of the most segregated neighborhoods in the heartland of the USA. AY's situation inspired him to find the creative outlet of music early on, giving up college basketball scholarships to take his story to the people through the universal language of music.

AY first came to national attention with his appearance on the hit television series The X Factor and has performed alongside several of today's hottest artists including, Wyclef Jean, SHAGGY, T-Pain, Aaron Carter, and more.

Shortly after AY's appearance on "The X Factor" where he received YES four times, he released his first album Above & Beyond featuring the singles "Say Hey" and "Creep Creep."

AY is the first-ever artist to power his concerts with 100% renewable energy and be licensed by the first-ever music platform to provide a stage for creatives, artists, and entrepreneurs to plug-in and share their talents.

AY proudly represents the BE YOU movement through innovative music and engaging performance art as the founder of The Battery Tour - a sustainable, all-inclusive music platform for the people.