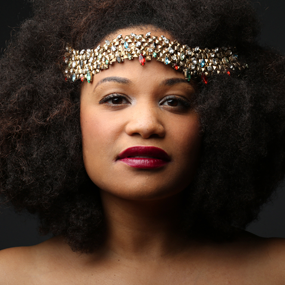 Featured on NPR All Things Considered, Spin, Rolling Stone, Billboard Magazine, Texas soul queen Tameca Jones has a talent as big as her home state. The Austin, TX native started out in 2005 when she joined Austin based neo-soul band 8 Million Stories. After a successful run that saw the band play SXSW and open up for chanteuse Corinne Bailey Rae, Tameca parted ways with the band to focus on her original music. While the singer composed music, she turned to performing covers to stay on the scene, grow her audience, and pay the bills. Her legendary takes on classic songs like “Bennie and the Jets” by Elton John, “All Apologies” by Nirvana, and “Hotel California” quickly made her weekly Thursday night residencies the place to be in Austin. The locals would line up for blocks to see her and her band burn down the Continental Club Gallery every week. They began calling her “The Queen of Austin Soul.”

Like so many legendary bands before her like Led Zeppelin, The Beatles, Fitz and the Tantrums, and Amy Winehouse, Tameca spent years breathing new life into the music of others while she worked on original music. Her fierce vocals, along with her quirky taste of covers, won her accolades, thousands of fans, and respect from the industry. In 2015, without any released music, she was given a highly coveted slot at the prestigious Austin City Limits Festival. Before her festival debut, she released her first single, “Hot and Bothered.” She has since released an EP called “Naked” in 2016 and two singles, the 2017 trap pop R&B banger “Good Boy” and 2018’s “Are You Awake,” which she wrote about hitting your ex up for a nightcap.

Grammy Award winning artist Gary Clark Jr. enlisted Tameca to sing on a track “Wings” for his album “The Adventures of Sonny Boy Slim.” In November of 2018, Gary tapped Tameca to open for his sold out theater tour across the country. In September of 2018, then senatorial candidate Beto O’Rourke asked Tameca to play his rally in Austin where a record 50,000 people attended. Now a presidential candidate, Beto personally asked Tameca to play at his presidential rally in Austin. She’s also opened for Grammy winner Leon Bridges, St. Paul and the Broken Bones, Willie and Lukas Nelson, Vintage Trouble, Shakey Graves, and many other notable artists. She won the best female vocals award at the 2017 Austin Music Awards, an award voted by fans. Tameca is a staple at SXSW Festival and has played the Apollo Theater, 2018 NFL Draft, Chicago Food and Wine Festival and many respected venues across the country.

With a healthy touring schedule and a fresh EP on the way, the rest of the nation will soon know why Austin, TX calls Tameca Jones the “Queen of Austin Soul.”