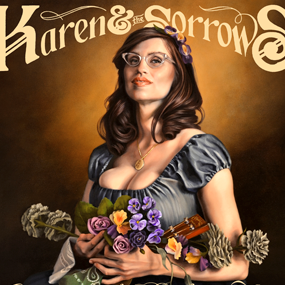 With the Sorrows’ third album, Guaranteed Broken Heart, singer-songwriter Karen Pittelman has struck off in new directions. The songs still feature her high, lilting vocals, dark country-rock twang, and powerful lyrics. But she also dove more deeply into the ‘90s country she loves, tapping into that era’s studio shimmer and polish. And in addition to electric arrangements featuring pedal steel, Wurlitzer, and brooding guitars, she called on some of her favorite local bluegrass musicians to add dobro, mandolin, banjo, and fiddle to many of the songs. The result is an album that draws on country’s varied roots to tell a high-lonesome, heartbreak story about grief and desire.