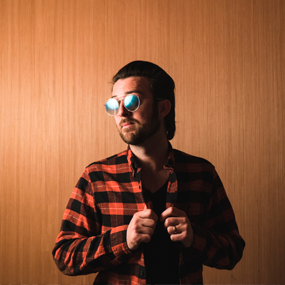 Best known through the Indie-Pop project Beach Tiger, Taylor McCleskey (a.k.a. Kit Kazar), has unplugged his synthesizer and retreated to his bedroom studio in pursuit of a more raw/impromptu rock sound for his latest solo project. “Pretty much anything goes,” says McCleskey. “At first I thought this was going to be a 60s-influenced venture but the more songs I write under the Kit Kazar name, the more I realize I don’t need to box myself into one specific style, or genre.”

Having played in bands for the last decade, McCleskey explains his decision to go solo and why he’s opted for a closed-door policy regarding his creative process. “The thought of creating, and finishing, something all on my own has always been insanely intriguing to me. Even when I was in a band, I found myself sneaking secret songs off to the side. I guess it was because I was afraid of what other people might do to them in a collaborative environment. I’m such a people-pleaser and extremely sensitive to feedback so by not letting anyone else hear, or influence, these songs until they’re finished they can turn out exactly as I heard them in my head. For each layer/instrument of a song, I limit myself to short recording sessions. I’ve found that your first creative instincts are usually best and there’s something freeing about only have five takes to choose from. I wrote a simple three-word bio for my Soundcloud profile, ‘Let’s have fun,’ and that’s my only aim here.”