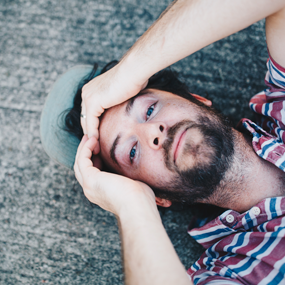 The synthpop quartet, Beach Tiger, released their first single, "Just Woke Up," in late 2015 and have enjoyed a steady rise of success ever since. While only releasing a handful of songs since their debut, the project has accumulated millions of streams worldwide and landed spots on some of Spotify's most coveted playlists including "New Music Friday" and "Indie Pop!".

Following a hiatus and subsequent lineup change in late 2017, Taylor McCleskey, Beach Tiger's singer/songwriter, decided to take a year off from the band to clear his mind. Not knowing if he would ever return to the project, he released a few tracks under the solo name Kit Kazar, made a board game, and binge-watched sitcoms from the early '90s. In between episodes of Cheers one night, he found an old hard drive filled with unreleased tracks. After weeks of focused listening, he landed on three that inspired him to re-open the project as a solo endeavor. The vibey EP entitled "Easy Livin' Dreaming" was released on January 24, 2019, on Coast Records.

When asked about the latest release, McCleskey notes, "I love every part of this EP. Not just the songs, of course, but the vibe, the artwork, the tones, the title - it all seems to set a mood that allows a listener to space out in their brain and escape reality - even if for only 9 minutes."